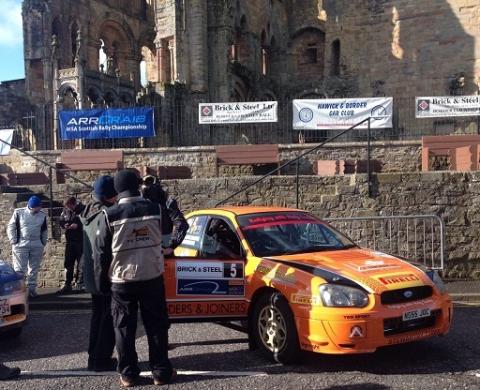 The Christian life is full of surprises.

For me, one of those surprises is Holy Socks and another is Rallying with Holy Socks.

Holy Socks have had an unusual sponsorship arrangement with rallying since 2005.

Over the years we've sponsored a number of rally crews with socks - Holy Socks.

For each round of the Scottish Championship, we have given our crew - or crews, a pair of Holy Socks.

Our current driver, Jock Armstrong has a lot of socks. We've been sponsoring him since about 2008.

Then after their crash on the Jim Clark Memorial Rally, Steven drove with Lee Kerr co-driving.

Then Jock took over with Kirsty Riddick and father and son drivers Richard and Peter Stewart came on board with their regular co-drivers Phil Shortt and Karen Logan.

Christine Lothian also got in on the act when she sat beside Jock on the Jim Clark and John Richardson guided Jock round the Armstrong Galloway Hills.

Paula Swinscoe won the Scottish Rally Championship with Jock and now we have Cameron Fair in the co-driver's seat.

Many others in the rally world have worn Holy Socks and we hope to add more photos and enlarge this story in the months to come.

The next round is the Scottish Rally, based in Moffat on July 23rd.

Send Us a Message