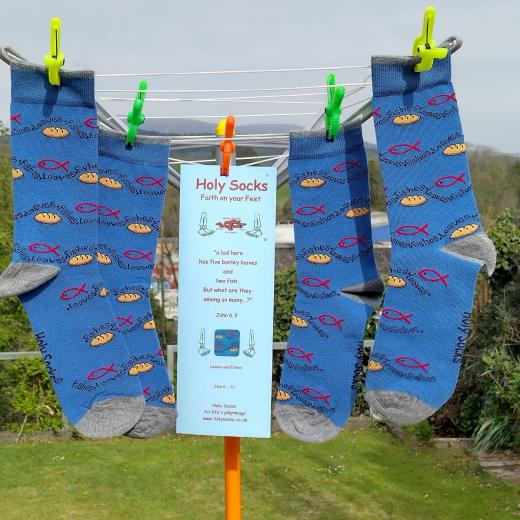 A lad here has five barley loaves and two fish. But what are they among so many….

Bring some of your fish..... Come and have breakfast.

"And they all ate and were satisfied."

This is one of the original half dozen designs which began Holy Socks in 2000.

"... five barley loaves and two fish. But what are they among so many…."

We’ve used a few different verses and have written many stories for it over the years.

An original design featuring a story between two boys listening to Jesus. One has five barley loaves and two fishes, but will he offer them to Jesus?

Loaves and Fishes was one of our original designs and although the design has had a couple of tweeks, it's much the same as it was then. We've had navy, denim, rust and even bright green - for the grass. John tells us "Now there was much grass in the place."

The questions this design raises for me are these.

What do we have to offer to Jesus?

Do we believe that we have anything to offer Jesus?

Does Jesus need us to make the offer?

What will he do with what we have?

The Breakfast Picnic version asks what is needed to serve God. Only that you love Jesus.

There have been a few stories that go with this design but one has not really been used for the general leaflets.

It goes back a number of years and I wrote it for our rally crew - I think it was for the Jim Clark Memorial Rally. For around the last 16 years, we've given a rally crew a pair of Holy Socks for most rounds of the Scottish Rally Championship. Two further pieces of background information are required. First of all, you have to remember when Ole Gunnar Solskjaer was super sub for Manchester United. (You're not required to be a Man U fan.)  Second you have to remember when horse meat was being added to, and masqueraded as, 100% beef.

The week before the rally, our new design hadn't arrived as expected and I needed a substitute.

SUBSTITUTE! SUBSTITUTE! Hey Fishy, we're on. We're on again. Come on, get a move on, can't hang around today, not at the end of a line anyway. Hang onto the road though, not coming off that. We're substitutes."

"That's quite a good joke from you, Fishy, but if you'd just calm down a minute, please. You're nearly purple, not just red. Just listen till I explain."

"Well it's like this. The socks for this weekend didn't arrive and we've been called in as substitutes."

"Yeh, I get that and I'm quite willing to help out anyone, Loafy you know that, BUT, I still don't like being thought of as a substitute."

"Well, if I were to tell you that Jesus was a substitute and a willing substitute at that, would that change your mind?"

"Don't know. Turn of the tide? Shift of the moon?"

"Don't be frivolous, Fishy. This is serious."

"Sorry. I'll be serious - in a minute. Can I be silly for just one more paragraph?"

"Was Jesus like Solskjaer - he's a cracking substitute. Sorry. Do you mean serious as in really serious and not to be laughed at? Just how was Jesus a substitute? Why did they not bring Jesus on at the start of the match? Always thought of Jesus as more of a referee, than a player - or a goalie saving the ball."

"Now Fishy, you're getting somewhere, despite yourself. Jesus as a goalie, but he didn't just save the ball, he saved everybody."

"Everybody? You mean the whole team?"

"No, Fishy. Not just the whole team. You're really getting me exasperated. Everybody, I mean everybody. Past, present and future. Will you just keep quiet for a wee while."

"That's when you're really naughty."

"So I can be naughty and not be sinning? This is sounding better and better."

"Fishy, in some ways it's easier to think of sin just as doing bad things but it's also, well the way I once heard it described like this: "Sin is anything that keeps you from being the person God wants you to be. Anything that makes you less than God can make you." Anyway, the only way God could get rid of all the sin was for Jesus to die on the cross instead of us. He took the blame for our sin so we can get rid of it."

"I don't think I understand that exactly, fully, in total - and I'm not being silly now, Loafy. I don't understand it, but that sounds like a good substitution from our point of view."

"It's quite deep, but you should be good with deep things - just a little quiet joke, Fishy. It was pretty rough on Jesus though. It's quite difficult to explain and if you try to simplify it, you can get totally the wrong impression - like it's as simple as just being good, but it's not, there's much more to it than that. Look, I don't want you to think I'm boasting or anything cos I'm not but sometimes bread is used as a symbol or substitute for Jesus."

"Yeh, it was like this, Jesus was with his disciples for a meal on the night before he died, "and he took bread, and when he had given thanks he broke it and gave it to them, saying, “This is my body which is given for you. Do this in remembrance of me.”

"Gulp, Loafy! I stand in awe and wonder before you."

"Not before me, Fishy. Stand in awe and wonder before Jesus, but not me. Better still, get down on your knees."

The mid blue with grey heels Loaves and Fishes are designed in the U.K and made in Turkey.

Children's sizes and denim and dark blue Loaves and Fishes are made in the U.K.