Holy Socks - how it all began 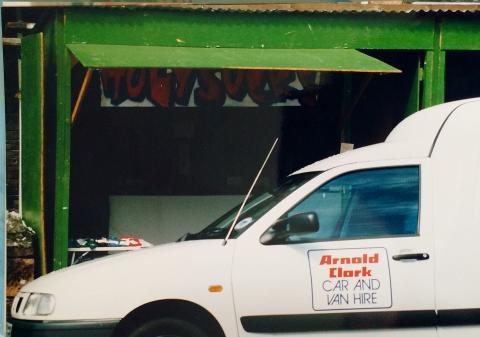 The beginnings of Holy Socks. - Highlights.

When people ask where Holy Socks began or where I got the idea for Holy Socks, I like to answer with one word - Skelmorlie.

Skelmorlie is a wee village on the Clyde Coast, a couple of miles north of Largs, which is famous for a particularly nice ice cream and, historically for The Battle of Largs where the Scots saw off the Norse Vikings. Skelmorlie continues into Wemyss Bay, where the Scottish football used to gather for training.  Now there's juxtaposition.

I was doing a course with the Scottish Churches Open College and a few of us were discussing what we called "The Jesus loves you" tee-shirt and, no offence to tee-shirt producers or wearers, we weren't so keen on wearing it. Someone was wearing Wallace and Gromit socks and putting the two together, we decided Biblical socks would be a good idea and I said, "they'll be called Holy Socks. Somebody will do them."

Determining to find "Holy Socks" and bring them to the next meeting, I set out to search the internet.

The more I looked, the less I wanted to find. A seed had been planted. I searched every relevant phrase I could think of but without really finding anything that would fit the idea.

You may be old enough to remember when there was a line across the bottom of the screen which showed the progress of the search. While it crawled along the search line, you could make a cup of tea and drink it.

Several cups of tea later, I still had found nothing.

The Bible wasn't available online in those far off days but my husband had bought me a Bible Explorer to help me with my studies. I typed in feet, walking, walks, heel, toe, foot run and anything else I could think of. Wonderful verses appeared on the screen and reading them, I knew there was more than a laugh in the whole idea of Holy Socks.

It took a couple of years to get the idea off the ground - well maybe I should say on the road.

I did a couple of business courses with Scottish Enterprise where the speakers warned that, at some point, we entrepreneurs would be up till three o'clock in the morning, at some point, would call on our last pennies to keep going, and gave us all the dire warnings about running our own business. They also told us it was wonderful and we'd love it.  I've found it all true.

My sister-in-law is a graduate from Edinburgh College of Art. In December 1999, our son was doing art at school and the two of them sat down and did some drawings for me. A friend got me a list of sock manufacturers in the U.K. and on the top of this list, having come off the computer in alphabetical order, there was the name Angel Hosiery Limited, Leicester. For a while we did have Holy Socks made by Angels.

Rikki made some samples and in June of that year we took delivery of our first batch of Holy Socks. I think there were 180 dozen pairs of socks, mostly green, sitting in the hall of our house.

What to do with them? I had thought of selling direct to churches, but friends of ours in the Lake District told us about the Keswick Convention and how the local joiner put up booths in the town and rented them out. His name was Mr. Green.  I couldn't help but think it suited the green Loaves and Fishes socks.

Mr. Green laughed when told him I'd like a booth. He wasn't laughing at Holy Socks, which is allowed. What he was laughing at, was that I thought I could phone him a month before the event and expect to get a stand. If I wanted one for next year, he might be able to get one for me, but for this year, there was no chance.  We left it that if someone wanted to share, cancelled or if in any other way a stand should become available, he would phone me.  A week later, he did. We had our stand.

Send Us a Message