Featured Design -The Ark and Rainbow 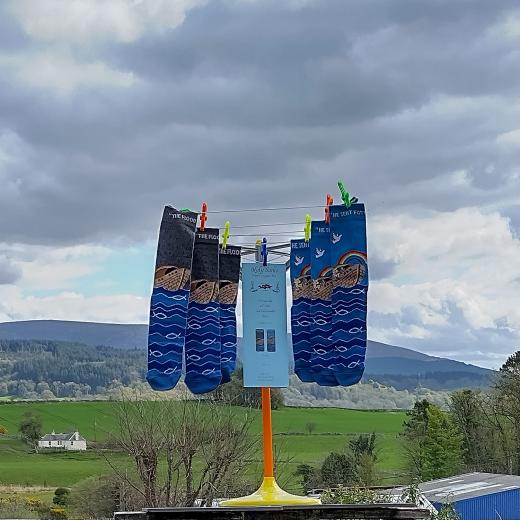 Featured Design -The Ark and Rainbow

“And Noah did all that God commanded him.”

That's Cairnsmore (not Mount Ararat) in the background of our first photo - the view we have from the Holy Socks office.

The verse we’ve chosen for this design is “And Noah did all that God commanded him.” Genesis 6, 22

Our giraffes discus, among other things, how well Noah must have listened to God in order that he build the ark well enough to do it's job.

Our Ark and Rainbow design is part of our “Not a pair of socks” range.

One sock has the closed-in ark with rain pouring down and “The flood of waters“ round the rib.

The other sock has an open ark with a dove and rainbow and “He sent forth a dove“ round the rib. Two giraffes and two zebras are out on deck.

Altogether a bright and detailed sock illustrating a much loved and well know Biblical story. A very popular sock since it’s introduction.

Feet are getting bigger so we’re pleased to be able to add this design to our 12 -16 size range.

This is the second design to feature the story of Noah and the ark.

Our original design was much simpler for adult sizes, although for children it featured a turn-over-top with two giraffes hidden under the ark.  We still have some of these, however later in the year, we'll be introducing children's sizes with a similar design to this, but slightly simplified.

Our original adult story was told by the Ark and since this is a "Featured design," we've added it below.

We used the verse from Genesis 8,4: “the ark came to rest upon the mountains of Ararat.” Genesis 8, 4

A Story from the Ark.

I think a lot. Well, there's not much else to do here in the mountains of Ararat. I've been here for a long time. Do you know what I think about?

I'll tell you. A lot of the time, I think about when I was built.

Well to be built is one thing, but to be built on the instructions, and under the guidance of God, that is quite another.

“And Noah did all that God commanded him.”

There aren't many that can be said about, but Noah did it perfectly, following the instructions to the letter. Now, that's not easy – well, at least I wouldn't think so. I mean, to start with, how did Noah know it was God speaking to him and how did he ignore all those people around him who told him that he was stupid, even mad to built me? There was no rain, not even a storm cloud in the sky when he began. What would have happened if Noah had paid attention to them and ignored God? There are plenty of people who do. I think Noah trusted God very much.

And what did Noah learn while he was building me? He certainly learned about carpentry and boat building, but I expect he learned a lot about God too and a lot about himself, which would be painful – almost as painful as it was for me to be built.

Oh the finished product – me, The Ark - is beautiful and I was perfect for the purpose I was made, but being shaped and moulded was painful at times and I couldn't cry out like you can. I'm not complaining you understand, just telling you the way it was.

Now I rest. My job is done and the animals and humans have all gone. Such a precious cargo I carried and protected from the rain. No wonder God gave such amazing instructions to Noah. The animals weren't so bad, but the humans could be a bit grumpy at times. Yet God went to such a lot of trouble to take care of them.

People talk a lot about me. Wonder about me. Some even think I don't, and never did exist. Others spend a great part of their lives trying to find me and prove I was real and not just a story. Children sing about me – grown ups too. I'm shown on jigsaws and am built all over again – and again. Oh, the fun of it all. I find it rather satisfying.

Of course I was at the start of a long line of rescue missions. That's even more satisfying. There was Moses who rescued the Israelites from Egypt, and the whale who rescued Jonah, and of course, the greatest rescue mission of all – Jesus, who came to rescue every single one of us – not just a few. Well, the God I know would WANT to rescue ALL people.

Now that I think about it, wood was involved in that rescue mission too.

These Holy Socks are designed in the U.K and made in Turkey.