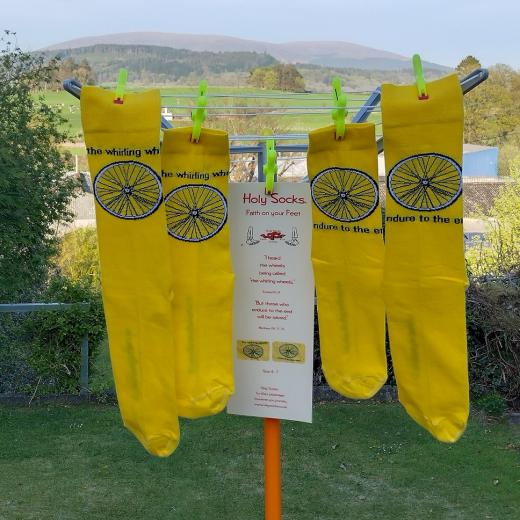 On one sock: "I heard the wheels being called "the whirling wheels." Ezekiel 10, 13

The cycle version of our "Whirling Wheels" design had an interesting beginning.

I was attending "Christian Resources Together" a retreat and trade gathering at The Hayes Conference Centre in Derbyshire. We were all set up and ready to go and I notice two ladies approaching our stand in deep and obviously interested conversation about something on our stand.

They pointed to our "Whirling Wheels" car design which we had just introduced. Did we do them in bike wheels? They asked. "No," I replied, "Just the car wheels" and I explained about the rally team which we sponsored with Holy Socks.

Would it be possible to do a cycle version in yellow? And could it be done in three weeks? It was 2014 and The Tour de France was departing from Leeds and would travel right passed the door of their shop in Skipton and thought it would be a good idea to have some cycle related socks.

It was a tall order to have them done in three weeks but our manufacturer made a wonderful effort and the socks were hung in the window and made quite a splash among all the decorated shops and pubs in the town.

They've been popular ever since with cyclists and followers of the various Grand Tours.

They've also been worn by our rally crew of Jock Armstrong and co-driver Paula Swinscoe on the Speyside Stages in 2014.  Jock had been suggesting for a while that I do a cycle sock so he was very happy with the new design and wore it on his bike in the Crossmichael triathlon that same year.

These Holy Socks are made in the UK