Featured design - Jonah IN the Whale 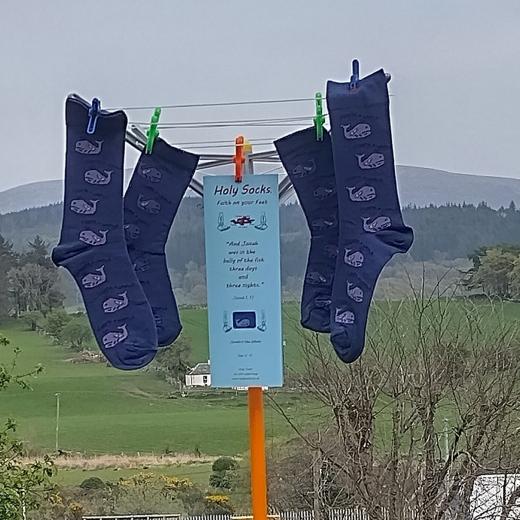 Featured design - Jonah IN the Whale

"And Jonah was in the belly of the whale for three days and three nights."

Told from the point of view of the whale, our seafaring friend recalls being called by God for a special mission. A long time favourite with Jonah in his yellow oilskins - there's a story behind that too.

A bit more about our Jonah design.

Holy Socks started off with half a dozen designs, one of which was Jonah in the Whale.

Even getting the mock up design was a big learning curve as I learned to use, what was then a very basic graphics programme. To get us started we scanned a sock to get the shape.

I always say that since I had run from God for nearly forty years, it was appropriate that one of our first designs was Jonah.

When we first took our half dozen designs to Keswick in 2000 during the convention, they didn't have leaflets, just small labels. It became evident that we needed something bigger to go with the socks and so we developed the leaflet. The stories came in this way.

I spent much of the early part of 2000 doing the "Life of Prayer" course with what was then The Scottish Churches Open College. Students had to do two projects - one of which was often organising a retreat day. I plumped for this option and chose Jonah as the subject.

I gathered together all sorts of things to do with whales and the sea, along with a map of the middle east showing Tarshish  and Joppa.  While doing both the Foundation Course a couple of years earlier, we had all been introduced to imaginative contemplation. This is way of prayer where you either put yourself into a Biblical scene and imagine yourself taking part or you observe what's going on from outside the scene.

I gave up and asked a friend of mine to write a sketch to use in the retreat. She obliged and wrote a modern take on the call God made to Jonah. In Keswick, I shortened the story to fit an A4 leaflet.

Returning from Keswick, I wrote another Whale story and then realised that I had to write stories for the other designs we had! Stories duly followed for Daniel, Loaves and Fishes, Moses in his Basket, Crook and Sheep, our Cross design and our Sporting Cross.

To go back to Retreat around Jonah, one of my support group suggested that my son (then still at school studying art)  should do something. The something turned out to be five panels representing the story of Jonah.  Each panel is about six feet by three. The first is of a ship in a storm. The next three are of sea storms. The final panel is what I call "Jonah has landed."  You can see them below.  I have a feeling that had I set up only these panels, with a few chairs at each, the retreat would have provided just as worthwhile an experience - possibly more.

Jonah has proved a rich vein for Holy Socks. We've now had three different designs of Jonah, and have used the Jonah IN the Whale design on our caps, and masks. All with different stories.  I've not managed to write an imaginative contemplation from the whale's point of view, but I'll keep trying.

These Holy Socks are made in the U.K.